Shawn and I decided to take a trip up to Mount Mitchell while we were in the Asheville area. It was a nice drive up the Blue Ridge Parkway. I had never been on the parkway, but had heard it was an awesome road to travel on. It was a good hour drive up Blue Ridge Parkway (it was only about 35 miles but all the curves in the road slowed progress) to reach the bottom of Mount Mitchell. Make sure your gas tank is full because we didn’t see one gas station the whole way there.

View from top of Mount Mitchell

Once you turn off of Blue Ridge Parkway you will have to take another road pretty much all the way to the top of Mount Mitchell. They also have a nice restaurant looking over the mountain about half way up. After reaching the top there is a parking lot looking down on the road we traveled up on and all across the mountain range. As we stepped out of the car I noticed instantly that we were going to have a bug problem so bring plenty of bug spray. There were flies everywhere.

There is a short trail, but very steep, that takes you to the tip-top of Mount Mitchell. They have benches every 20 feet or so to stop and take a rest. When you get to the top you will notice a stone structure that is the grave of the man who discovered Mount Mitchell. Walking past the grave site is a bridge leading up to a platform area which is the highest point east of the Mississippi. This is the best view from the mountain. 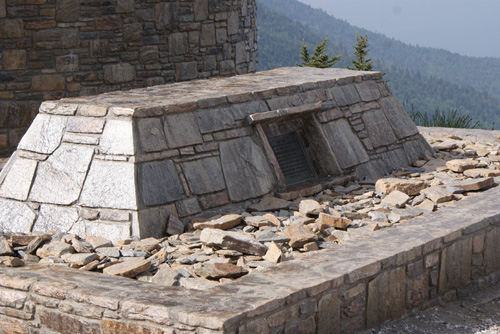 We had a good trip up there. I think the drive up to Mount Mitchell down the Blue Ridge Parkway was more enjoyable to me. Do I recommend traveling to Mount Mitchell? Yes, because who wouldn’t want to stand on the highest point east of the Mississippi!

Chimney Rock is located near Asheville, NC. Shawn and I drove up to Asheville and stayed a couple of nights to visit a few places including Chimney Rock. It was a beautiful drive to the bottom of the mountain, twisting and turning through the mountains. Once we reached the entrance to Chimney Rock we were told that the elevator was being worked on, so we had to go to the top old fashion style.

About half way up the mountain there is a small cave you can walk down in, which was called the Moonshiners Cave. The walkway down into the cave is very tight, but only goes a few steps down. After leaving the cave we continued walking up the mountain, continuously taking breaks because it is a steep hike. Once we reached the top the view was gorgeous. It took us about 30 minutes to climb to the top of Chimney Rock. I was so happy once we got up there because my calves were on fire!

After walking down the mountain we saw on the map that there was a waterfall right around the corner, or so we thought. We started to hike the trail to the Hickory Nut Falls, and the trail kept going on and on until we saw a map that showed we were only half way there. The hike to the Hickory Nut Falls was nice because it was a flat trail through the woods with a nice view down the mountain. Once we reached the waterfall, I was amazed at how tall this thing was. When you reach the waterfall there is a little deck you can walk out on that gives you a great view of the waterfall, but that wasn’t enough for me. I climbed down off the porch and got right underneath of it. The mist from the waterfall felt great on a hot summer day.

If any of you guys love hiking, beautiful views and a great atmosphere I highly suggest going to Chimney Rock and checking it out, or even if you don’t like hiking that much they have an elevator you can take all the way to the top of the mountain and still have the same beautiful view as if you were to hike up to it.

We took a trip to the Congaree National Park this past fall during a very rainy Sunday morning. This trip was also done iron man style. We worked at the club from Saturday 7pm to Sunday 3am and left for the trip around 5 am in the morning. Congaree National Park is right outside of Columbia, South Carolina which is about a three and half hour drive from Myrtle Beach. It is out in the middle of nowhere, down an old country road. Once again our Garmin came into great use with not getting lost on the way.

We had called in advance to their office to set up a time(9 am) for the free guided canoe trip they do for visitors of the park. This is a great thing they do for the public and I think any family should take this free opportunity. The canoe and gear are all provided for the 2 plus hours on the river, all you do is bring yourself. The guide was very knowledgeable and a 15min lecture was done before getting on the water. That day all together we had about a group of 15 people along with us, The water level was low that day, the next time I do this again I plan on going right after a heavy rain storm. It made it a little harder to navigate around the obstacles when the water level was low especially when two people in the canoe are around 200 lbs each. So Josh and I were pretty much in the back of the pack much of the morning. Nick had an easy time because he was with the guide on the river. I don’t think he even paddle that much during the whole time. We had a great time on the river, we saw a few snakes and a beaver dam. No gators were around so do not worry about that. Below is a very short clip of the canoe trip, we could not film more due to the heavy down pours at some times. The park do the canoe trip rain or shine but not when it’s lightening.

It was around noon when we were done with Congaree National Park and decided to go into Columbia for some food. I heard that Pawleys Front Porch had the best burgers around so we decided to go there. The burgers were great I just wished that I would have ordered the deep-fried pickles as a side too. We plan on going back in a few weeks when we visit the zoo in Columbia. I’ll make sure that I take some photos at that time.

Wanna See It All

Wanna See It All